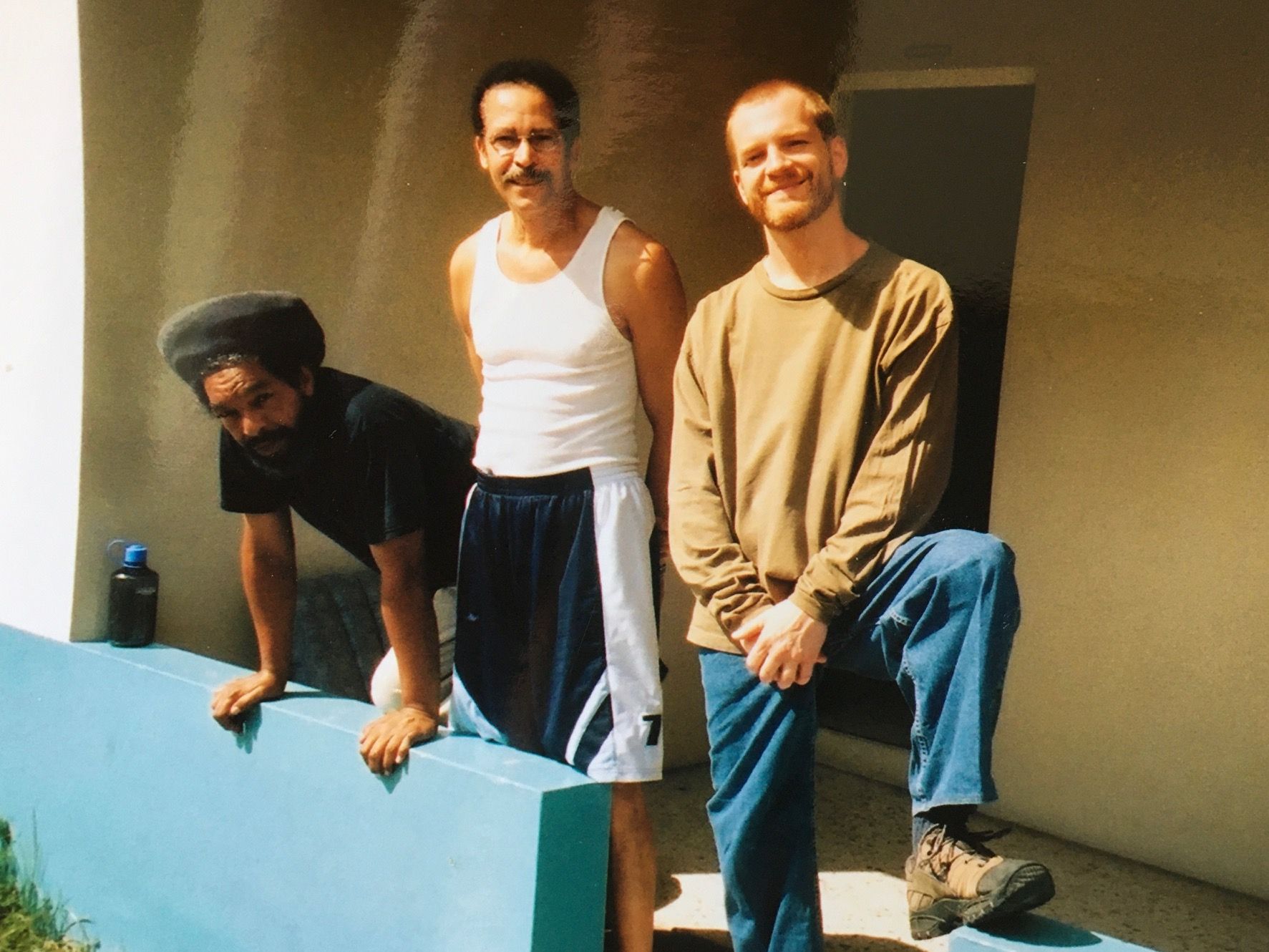 When The Skatalites departed Jamaica's legendary Studio One recording studio in the mid sixties, Clement "Coxone" Dodd employed Alpha Boys' School alumni Bobby Ellis to recruit replacement musicians. Pictured here are drummer Joe Isaacs, who was 16 when he got the job, and bass player Brian Atkinson, who auditioned in 1965, at the age of 19. Brian had only ever played on the "box guitar" that his brother built for him, but since the audition was on bass, he figured he would only have to play the top four strings! The teenaged Jamaican keyboard prodigy Jackie Mittoo would go on to lead the band, but for now he would invite Brian to share his piano bench, showing him how to play this bass line and that. Between the two of them they would shape the sound of reggae music to come. This was at a time when all of Jamaica was dancing to ska music. Joe will tell you that he invented rocksteady, because he couldn't keep up with the tempo set by his predecessor, Lloyd Knibbs. And thus, a slowed down version of ska appeared on the scene that would be dubbed "rocksteady".

This photo, taken in Kingston's Kencot district below Half Way Tree, captures Brian at a time of transition. I had inspired Brian to come out of musical retirement to form the Halifax incarnation of my band by the same name. Unbeknownst to the public, Brian had been driving a Metro Transit bus in Halifax for over 16 years, keeping his beard and hair neatly trimmed. But once he was back in the saddle, he had visions of reuniting the old Studio One band, The Soul Brothers aka Soul Vendors aka Brentford All-Stars. So he showed up at my door one day with a sheepish grin, announcing that he had retired from his bus driver job. He had been in touch with Joe and they had decided to make a go of it. Consequently, he invited me to fly to Miami along with our horn section at the time, Matt Myer and Eric Landry, where we would rehearse a set of Studio One material and line up a "tour". The four of us left for Miami in Brian's minivan on December 3rd, 2004. It was minus 30 degrees when we left Halifax and plus 30 degrees when we arrived two days later. Following two weeks of rehearsal, our five-piece version of The Soul Vendors band flew to Kingston, where we were met by a stretch limo and whisked away to the Pegasus Hotel, where we would play an intimate, lounge-style "homecoming" gig. The event drew some modest media attention but more importantly, a lanky, lone figure whose profile appeared at the lounge entrance. The lead singer (cum incumbent Studio One bass player) of the World famous Heptones had come to see if it was true; if the old Studio One band that had backed his singing trio so many years ago had reappeared in Jamaica after all these years. In a delightful reunion, Leroy Sibbles sang hit after hit with our newly formed reincarnation band.

Sibbles made regular appearances at the Kencot Motel, where we were being put up by the local Don, Eva. The New Year's Eve gig at Eva's strip club was cancelled and it soon became clear that there were no gigs booked for the band. Eric and Matt swiftly departed for the airport in a cab. They had both quit their respective day jobs in Halifax to be here, but no gigs meant no income, and worse, they had lost faith in the "management". I stayed on, in hopes that Brian and Joe could keep it together, and effectively create something from nothing. After some time, with no movement, I too left to reform the Halfway Tree band back in Halifax, recruiting the talents of Alec Frith to fill Brian's massive shoes on bass.

Bo-Peep joined Joe and Brian for a spell on guitar, at the compound in Kencot where they rehearsed, but they only ended up playing a gig or two. Eventually Brian returned to Canada, where he and I made a full-time job of playing music together every day. On one of many subsequent trips to Jamaica several years later, DJ Friendlyness and I picked up Joe in Negril and drove to Harry J Studio in Kingston, where we recorded my original track, aptly entitled "Rocksteady".